The two founders of The Green Lab approached me in the summer of 2019 for a brand identity for their new café / fitness studio in Manchester’s Northern Quarter. Their focus was on sustainable, health orientated goods and services; from fresh smoothies to yoga classes.

At the start of any branding project, it is essential to gather as much info as possible. After our first meeting, I tried to gather an in-depth insight into their vision for the brand. It’s always a process of asking questions and building a framework for the design work about to take place. Following our meeting, using the notes I made, I created a mind map visualising the various ideas we discussed.

From the off, I gathered they had a pretty solid idea of what they were after. A big focus on health and well being was at its core, along with minimal, considered visuals. The identity had to work on a range of products and remain recognisable. The brand also had to be distinctive and set it apart from the other cafés / bars in the area.

I explored different associations with the words ‘Green’ and ‘Lab’, which appeared to be a somewhat juxtaposition. ‘Green’ relating to nature, and ‘lab’ relating to something more synthetic and artificial. This dichotomy is something that stuck out to me as an element to explore.

The next part of the process is getting a generalistic feel for what the founders envisioned for their brand. A great way of doing this is creating a series of style-sheets. Stylesheets are a collage of visually similar images found online grouped together to form a concept. I wanted to create 3 distinct concepts for them to choose from to give me a better understanding as to what they were after.

The first concept was a washed-out colour palette of green and bronze. This idea focused on flora and fauna, and was heavily inspired by the cafés and bars I encountered on my travels in Bali. The beach-side cafés in this part of the world had a uniquely summery vibe.

The second concept worked with a dark green and its complimentary colour; pink. This direction had a more feminine vibe, and also heavily featured tropical plants. This concept had a more playful, illustrative feel.

The final concept (which ended up being chosen) was darker and more atmospheric. The colour palette was deep green, with touches of white and bronze. The overall feel was sophisticated and stylish.

After a second meeting, the client decided upon the third style sheet and we discussed further ideas for the overall appearance of the brand. By this point, I had a solid idea as to what they were after, so I began work on the logo.

I created a large number of sketches exploring different logo styles in line with the vision we had built for the brand. At this point, I wasn’t being too selective, allowing different ideas to flow freely onto the page. A lot of these ideas didn’t come close to the final cut, but it’s worth drawing it out before dismissing an idea.

After I was happy with a number of these sketches, I began re-creating them digitally. I landed on 6 strong directions for the brand. I collated these in a document containing the logo along with relevant mockups to view the brand in context. I presented these to the client and we had a meeting as to which ideas they liked best. Pictured below are three ideas that were picked out as strong contenders for the logo.

The first concept looks basic in appearance; a geometric leaf and a box. However it conveys the message of the brand in a minimalist, symbolic way. The leaf represents the ‘green’ aspect of the brand, and also forms the letter ‘G’, the box represents the artificial, human touch and also forms the letter ‘L’. These two shapes can be stacked and arranged on different products as seen in the mockup.

The second concept is another example of simple geometry laden with symbolism. The leaf representing nature inside a test-tube representing the ‘lab’, drawing on the dichotomy of the brand name. Again, this logo is instantly recognisable and simple in form and structure. You can see below the logo used in context on the mockups pictured.

The final concept is a combination of the box (representing the artificial, ‘lab’) and a Fibonacci spiral. This logo was a bit of a love letter to one of the fundamental principles of design in nature; the Fibonacci sequence. Like the other two concepts, this draws upon the ‘green’ aspect of the brand and the ‘lab’ aspect. The logo also forms the letters ‘TGL’; the initials of the brand. This logo can be used as an icon throughout the broad range of products the client had planned.

After a lot of discussion between myself and the client, we landed on concept three. They were drawn to its simplicity and minimalism, as well as the significance of the brand’s initials within the logo. They also were pleased with the recognisability of the logo. I particularly liked how the linear nature of the icon looked visually similar to illustrations used in alchemy. The subliminal message behind this implying the company is rooted in an understanding of health and well-being.

In order to refine the concept, together with the client, we thought of a number of variants of this design, with alterations to both the logo and the positioning of the text. Below, you can see an idea we experimented with using the mathematical Fibonacci sequence to construct a leaf within the box. Increasing the number of intervals and seeing how the logo would work in terms of legibility; it was essential the logo could be recognisable at a small scale.

We decided the leaf and Fibonacci sequence design pictured above looked too clustered, so we decided to simplify the idea. We went back to the ‘TGL’ box icon, with a subtle hint to the spiral design in the shape of the letter ‘G’. This final logo can be viewed on a small scale and still be legible. It can work on packaging, can stand on its own and be used along with the wordmark ‘The Green Lab’. The wordmark can be positioned horizontally beside and beneath the logo, and also can be turned on a 90 degree angle.

To complete the project and present the finalised concept, I created a Branding Pack. Within this document, each variation of the logo is outlined along with its appropriate use. The use of the brand is displayed on relevant mockups in line with what the client proposed. A colour palette was also chosen, based on the stylesheet I presented earlier, which was also presented alongside the logo. A branding pack is a great way to show the client and other collaborators how a logo should be used in order to maintain a consistent brand image.

This project was great fun to work on and both myself and the client were really happy with the outcome. You can see the final logo we decided upon in my portfolio linked below, or you can visit their website: TheGreenLabNQ 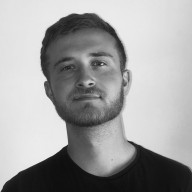 Join the discussion and tell us your opinion.

Oscar Inghamreply
– In reply to: Alex

Really appreciate you taking the time to have a read! This was one of my fave branding projects to date

Could not recommend Oscar enough! Honestly the best graphic designer I have ever worked with. We are so glas we took him onboard The Green Lab project!

Was a pleasure to work with you on this! Can’t wait to see what’s next for The Green Lab